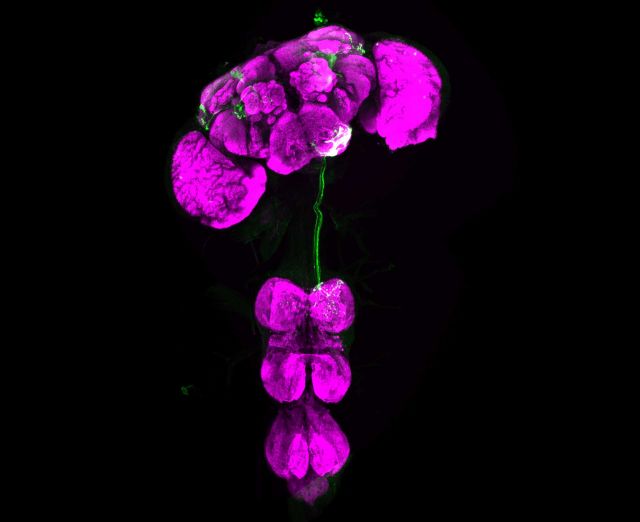 Everything we do comes down to a series of neural signals that translate into physical behaviors. We receive information through our senses, sensory neurons convert this information into electrical and chemical signals that are processed by other neurons in our brains and ultimately, motor neurons fire muscles that move our limbs. But how these signals complete their circuits — and how these circuits compete — is not completely understood.

This mystery fascinates UC Santa Barbara researcher Julie Simpson. How do the multitude of different signals become the appropriate actions? How does the nervous system organize competing information into what to do and in what order?

“Animals do amazing things — and many of the behaviors we observe rely on precise movements,” said Simpson, an assistant professor in the Department of Molecular, Cellular and Developmental Biology. “There are different tools and approaches to measure these behaviors and to manipulate the activity of the neurons and circuits that control them.”

Take the fruit fly (Drosophila melanogaster), a well-studied genetic model organism whose neurons scientists like Simpson have learned to activate with light. In a recent study, Simpson and her graduate students Neil Zhang and Li Guo determined that the sequence of grooming, an innate fruit fly behavior, is a complex choreography of movements that results from comparisons between relative amounts of “dirt” (red light, actually) stimulating neurons on different regions of its body.

Where and how do these calculations occur? Unlocking this link between brain and body would not only advance basic knowledge in neuroscience, it could also shed light in human conditions in which the signaling doesn’t work properly, such as with Parkinsons’ Disease or obsessive-compulsive disorders.

Now, with a National Science Foundation (NSF) CAREER Award, Simpson is poised to do just that. Presented to “early-career faculty who have the potential to serve as academic role models in research and education and to lead advances in the mission of their department or organization,” the CAREER award will allow her to embark on a deeper dive into how neural circuits govern action.

“I congratulate Julie Simpson on receiving this prestigious NSF CAREER award,” said Pierre Wiltzius, dean of mathematical, life and physical sciences at UC Santa Barbara. “Her work on neural systems contributes to our understanding of how our brains connect to our bodies, and holds a lot of promise for future applications in neuroscience and beyond. She continues a strong tradition of stellar young faculty receiving national recognition, and I look forward to her continued success.”

“The NSF CAREER Award is wonderful,” said Simpson, who teaches classes on genetics, and literature in neurobiology, and co-organized a summer school on the neurophysics of sensory navigation at UCSB’s Kavli Institute for Theoretical Physics. “It is a five-year grant to support basic science research integrated with teaching, so it allows me to plan for my lab’s future. I am honored that my peers and the NSF judged the research proposal worthy of support, especially in such a competitive funding climate. Dr. Durafshan Sakeena Syed (postdoctoral fellow) and Li Guo (MCDB graduate student), along with a team of UCSB undergraduates, contributed to this research and will be supported by the grant, so this is a win for us all.”

The focus of this grant will be on the fly’s descending neurons, which connect its brain to its ventral nervous system.

“The descending neurons connect those two parts of the nervous system and are an information bottleneck,” Simpson said. A limited number of neurons control a wide repertoire of movement, coordinating commands and competing reflexes into productive behaviors. Optogenetic and machine learning techniques will be used to map the neural connections between sensory and motor circuits and pinpoint where on this map decisions governing physical behaviors are made.

“Understanding what aspects of a behavior are executed directly in response to specific sensory cues, what aspects are packaged together into subroutines, and how subroutines are called in sequence would illuminate the control architecture that assembles complex behaviors from simpler building blocks and allows flexible responses to competing stimuli,” Simpson said. “Since human brains also solve similar challenges, dissecting the descending circuits for fly grooming would provide a template algorithm we could search for in ourselves.”

Simpson completed her doctoral degree at UC Berkeley in 2001, followed by post-doctoral work at the University of Wisconsin, Madison. Establishing her own lab at the Janelia Research Campus of the Howard Hughes Medical Institute in 2006, she conducted research there until she joined the UC Santa Barbara faculty in 2015.